By Teresa White and Susan Hudgens 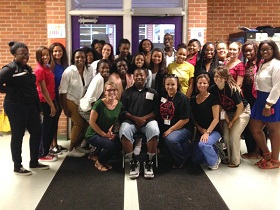 Four years ago, Teresa White and the Minority AIDS Outreach department started piloting a project to mobilize teens in Alachua County to address the issues impacting them and their peers. The project is appropriately titled Peers Advocating for Unified Services and Education, or P.A.U.S.E. While beginning to train teen volunteers, the Outreach team worked to sustain the project with little funding. They reached out to UF staff, students, local businesses and community agencies - and found the support to make it happen. Included in the community partners is Dr. Cook of UF, who will be collecting the data the project generates. When the P.A.U.S.E. concept and plan was presented to the School Board of Alachua County, they embraced the idea and expressed support.
The program started with seven P.A.U.S.E. advocates at Gainesville High School (GHS). They have worked very hard promoting, recruiting, and linking peers to services that include STD and HIV prevention and testing, pregnancy prevention, drug and alcohol prevention counseling, homelessness, dating violence, abuse reporting, anti bullying and coming out as a GLBT teen. The team is proud to report that one of the greatest goals has been met: The P.A.U.S.E. teen project is now an official after-school club at GHS!
For more information about the P.A.U.S.E.,
go to www.313hiv.com .